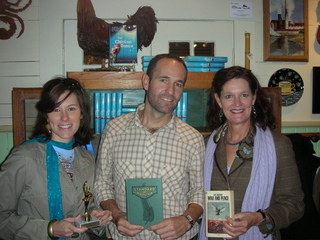 Book signing at The Coffee Break in Breaux Bridge. The two ladies are my sister and my niece. 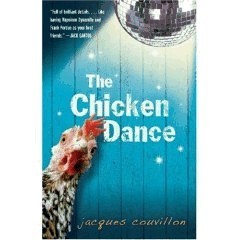 This is the cover of the book I wrote. Sometimes I felt like that chicken when I walked through Times Square. 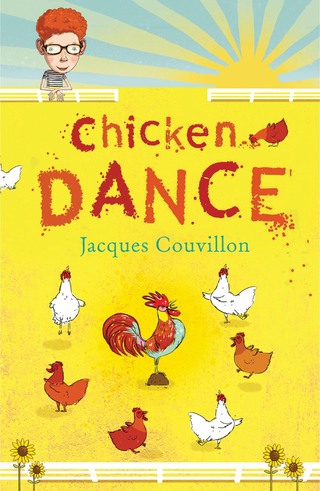 This is the cover in the UK. Just in case you find yourself in a bookstore there. 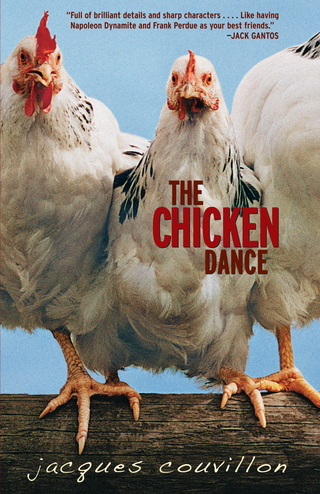 This was the first cover. The new cover is on the first page. 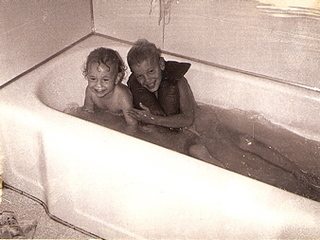 My brother saving my life. 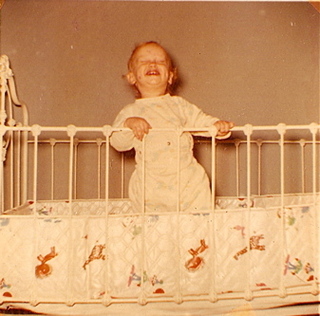 I guess I thought something was funny. 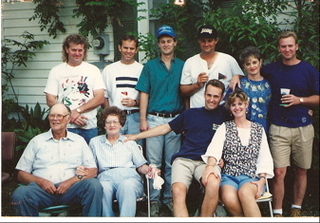 My family, my love 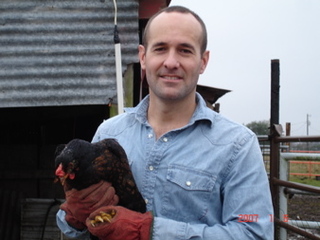 What can I say? It's a picture of me holding a chicken. 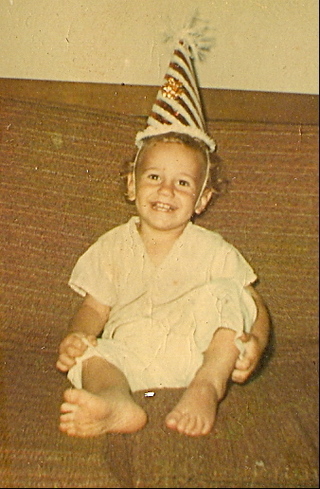 When birthdays were about getting presents and not getting gray hair. 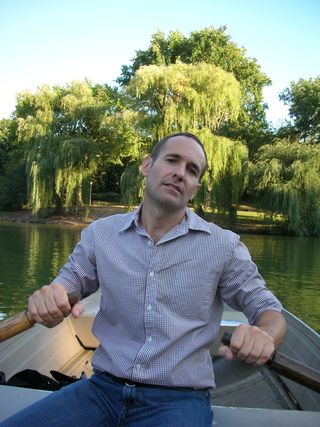 My name is Jacques and I was born on a farm in Cow Island, Louisiana. My parents are Andrew and Julia Couvillon, a farmer and school teacher respectively. I am the youngest of eight children; Sandy, Kay, Mike, John, Joe, Ray and Jude. What can I tell you? My parents are Catholic and we didn't have cable.

I always knew that I wanted to write but I was scared. I thought people would laugh at me, or that I was wasting my time, or that I might fail. So I took what many people consider the secure route. I majored in business in college, and then moved to Atlanta to begin a career in retail management. After a few years, I decided that I needed more security, and so I attained a masters in business from the University of Connecticut. Upon graduating, I moved to Chicago to start what I thought was the beginning of my secure life long career; marketing uniforms.

I thought life was good. Not great, but good. I had a decent job, great friends, an apartment with a washer and dryer, and one of the six black Jettas parked on my street. But something was missing and I didn't know what. And then one day while driving to work and preparing for a peformance review, I asked myself where I wanted to be in five years. My response was, "Not marketing uniforms!"

For the next couple of years, I searched for my passion. All I knew was that I didn't want to work for the uniform company, and I wanted to live in another country. And then one day while researching grants and scholarships, I came across an opportunity to go to Africa and write a book.

I didn't apply for the grant because I was too old. But for some reason, a light bulb went off and I realized that I wanted to be a writer.  At the time, I realized that in a couple of years I'd be thirty and that it was time for me to stop being scared and to pursue my passion. I knew it would be hard, but I also knew that going to a job I didn't like and living a life that was just "okay" was also hard.

Another year passed though and I still hadn't made a serious move towards becoming a writer. I was holding on to my old life like a security blanket. But then one day, I let it go.

It was during the holidays and to celebrate, my company's HR department set up a karaoke machine in the lunch room. My boss paid me $5 to get up and sing. I didn't really like the meatloaf I was eating at the time and thought I could buy something else with the $5. So I got up and sang the one song I knew. Friends in Low Places by Garth Brooks.

The crowd went crazy. People threw money at me and stood up and cheered me on. I felt alive for the first time in a long while. And it hit me that there was something else out there waiting for me. So two hours later I quit my job without a clue of what I was going to do. That night I decided to move to New York and study writing.

I arrived in New York in 2000. Over the next several years, I worked as a punching bag for a crazy person, a caterer, a front desk clerk at a hotel, a tie sales man, a secretary and a nanny or should I say a manny. I cashed in my 401K, searched phone booths for spare change, and sold old suits to a friend to make ends meet. Internet companies went under, 9-11 happened and my friends from graduate school got laid off left and right. Those first six years were extremely hard for me and every day I questioned if I'd made a mistake by leaving that security blanket in Chicago.

But then one day I received an email from my agent telling me that Bloomsbury wanted to publish The Chicken Dance. I realized that the hardest six years of my life added up to the biggest payoff of my life. Even if the book had never been published, I've come to realize that I've learned so much by taking this chance. I encourage everyone who has a dream or a passion to pursue it. I'm not saying to do it the way I did it. But at least research it. The results may not be what you expected, but at least you'll know. And you'll learn things you never thought possible.

Advice on First Steps Towards Getting Published

My first bit of advice to you if you’re trying to get published, is to finish what you're writing. I know it might sound strange but I know that I was so excited about being a published author that sometimes I forgot that I hadn’t actually written anything. I’ve met a few other writers who feel the same. When you're finished with your story or manuscript, put it aside for about two weeks. Then purchase a book or look online for information about how to format a manuscript. There are tons. Some are only on formatting and others include info on how to properly contact agents and editors. I don't remember which one I used. Spend time at book stores looking thru the different ones. Then read the book and take notes.

I used an agent and I feel that he's paid for himself. They don't ask for money upfront. They take a percentage, about 15, for whatever they sell the book for. But it's too soon for an agent yet.

Now, go back and take that manuscript out and read it and correct it again. Then think about people who are readers and preferably writers. Ask them to read it and provide feedback. But make sure they are readers. Otherwise they won't read it, or they might and not know how to provide feedback. And that will only irritate you. Give people about 3 to 4 weeks. Then take their feedback and think about if any of it is credible. Then read your manuscript again and see if it needs to be edited. Then read it again and again.

I was taking a class when I was writing The Chicken Dance so I had constant feedback, which I found to be very helpful. But there was a professor and these people were true writers so they provided excellent feedback.

When you are absolutely positive that the manuscript is as close to perfect as it ever will, take out your formatting notes and do everything. Make sure margins and spacing are correct. There's even a proper way to place the title on every page.

Then, there's a book called, Writer's Market to Agents and Editors. Buy it or check it out from the library. It lists all of the contact info to editors and agents. I started with New York agents just because I lived there and thought they might be better connected to publishers. But there are agents all over the US and I'm sure they're great. I went thru the New York list and marked agents who were looking for new fiction in the family saga genre. Then it's like looking for a job. Send the agent a cover letter telling them who you are, and about your manuscript. Ask them if they'd be interested in reading it. Make sure you send a self-addressed stamp envelope, or they won't answer you back. I got a lot of rejections but one guy agreed to read it. And he found Bloomsbury for me.

But I cannot stress enough how important it is to make sure you're finished your manuscript and you are positive that it's as close to perfect as it can be. Don't get me wrong. I had to change a lot between my agent and editor's advice. It's almost a different book. But I was positive that it seemed professional enough and had some structure.

I hope this info helps. If you're having a hard time writing, just keep doing it. Try to set aside time everyday. Even if you just sit and stare at the screen. Or do research on the subject. Or take a walk and think about the story. Or watch a movie that has something to do with the story you’re writing. Just don't forget about it.

I'm not saying that I give great advice, but I thought I would share some of the stuff I learned from this whole experience with people who are interested in writing.

1. My greatest lesson from studying writing was not learning how to write. It was learning what type of writer I was.
2. The best way to write a novel is to actually write.
3. I will never be Ernest Hemingway and Madonna will never be an opera singer. But that's okay.
4. The day I write the perfect first draft that doesn't need to be revised, is the day pigs fly and I win an academy award for doing someone's hair and make-up
5. Standing in the middle of a Pilot gas station/ Wendy's and listening is research to a future great novel.
6. Fear is my greatest obstacle.
7. Everyone wants to write a book. It's important to filter their advice or you might do it for them.
8. You can write a novel in a week. It might not win awards but it gives you a beginning, a middle and an end and makes the difference between saying, "I'm writing a novel",? and "I wrote a novel."?
9. The rush I receive from writing that first sentence can only be compared to sky diving and writing that final sentence.
10. From the time I first got the idea for The Chicken Dance and the time it was published was five years. In a writer's world, that's short. Be patient.